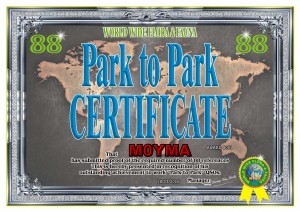 Following its launch earlier this year, the Park-To-Park award has proven quite successful.

Already 33 activators have earned the entry-level award (10 P2Ps confirmed) while a number have already achieved the award for 44 confirmed P2P contacts.

As such, WWFF is pleased to announce that the next level, for 88 confirmed P2P contacts, is now available through Logsearch.