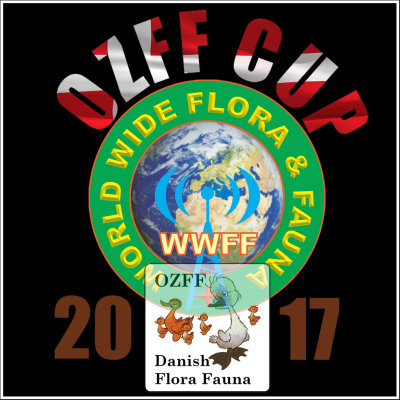 The OZFF Cup is a simple competition starting January 1st and ending December 31th.
Back in 2012, we got the idea of a little game to motivate Hunters and OZFF Activators. Hunters get 1 point for a QSO one time band/mode. The Activators get 1 point per QSO. If more than one Activator is on the air from the same area, Hunters also get point for QSOs with the other Activator. This motivates Hunters to have more than one QSO with the same area. If the Activator starts up a new Activation, from the same area but on a new calender date, both Activator and Hunters will have points again.

We have Awards for the top 3 in all Classes.
Since 2013 We had the Cup going on every year and lots of fun. From the beginning big activations like PA1H / PA7PA at OZFF-0001 and also I2AE´s OZFF tour.
And Yes, I became the winner of the Activator Class in 2016. But to be honest, every year I hope from the bottom og my heart not to become the 1st. Activators have to become more active than me. Lots of OZFFs on the air is what we(re working for.
See You on the air in 2017